BAK Economics has calculated the prosperity level for the labour market regions newly published by the Federal Statistical Office on the basis of gross domestic product per capita for the year 2018. In contrast to the political administrative boundaries, the 101 labour market regions and a total of 16 large labour market regions are characterised by the fact that the majority of the inhabitants also work in the same region. Distortions in the economic performance of a region caused by commuters can be partly compensated for. This makes these data particularly suitable for economic analysis. As expected, the large centers lead the ranking. However, regions that would not necessarily be expected here also appear among the top 10. For example, the labour market regions of Zermatt and St. Moritz, which specialise in tourism, or the Le Chenit region around the Lac de Joux with its strong focus on industry. These three examples have in common that, despite a rather small population, they achieve a good economic performance in terms of GDP. The latest data on these 101 labour market regions are available immediately from BAK. 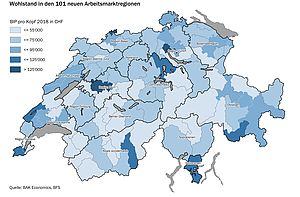 With the comprehensive databases and the comprehensive model world of BAK Economics, various economic contexts can be highlighted. The possibilities range from structural analysis to benchmarking to forecasts. The Swiss regional database contains indicators up to municipal level. The regional model allows value estimation for the smallest administrative units in Switzerland. The various interlinked macro, sector and regional models are the backbone of quarterly economic forecasts for Switzerland. BAK also has other special models for simulations, forecasts or impact analyzes.

Based on the «International Benchmarking Database», the benchmark reports provide information on the economic performance and the economic structures of a region, compare them with competitors' locations and show strengths and weaknesses, opportunities and risks. In special evaluations, BAK also analyzes and compares how efficiently public services are provided in a region.

Site marketing analyzes provide meat on the bone for the marketing of regions as residential and business locations. Based on the extensive databases, BAK uses these analyzes to show the advantages of a region in an international comparison with target-group-oriented illustrations and lines of argumentation.

Regional monitoring is an instrument for evaluating regional policy projects. It measures the effectiveness of NRP, interreg or other projects. It shows, for example, how many jobs have been created or how much added value has increased.

The regional and subregional models can be used to make forecasts for the economic development of a canton, its subregions or any region that can be defined as desired. The forecasts include not only the overall but also the sector-specific growth prospects.

Impact studies reveal the economic effects of an industry, a company or an economic policy measure. They measure the impact on the economic performance and competitiveness of a region.

With model and estimate calculations, BAK provides information for a realistic and accurate budgeting of the public sector. The calculations show how the public budget will develop in the future and the impact of financial policy measures. The models underlying these calculations are embedded in the Swiss financial model and take into account further subregional economic indicators.

Development of financial flows under the NFA

Based on specially developed resource and load balancing models, BAK estimates how the financial flows under the NFA will evolve for a region in the future and provides forecasts for the future development of the relieving and stressful factors.